1st Citizen Lawyers is a specialist British immigration law firm with offices in London and Birmingham. Each year, thousands of individuals and businesses in the UK and abroad rely on its services to secure their desired visas and make the UK their home and place of business. Fraz Wahlah, the CEO of 1st Citizen, uses his early experiences of activism in Pakistan to question whether the government and our society have turned away from Britain’s founding values.

Almost four decades ago, the world saw a forward looking, liberal and progressive country in South Asia plunge into the dark abyss of fundamentalism, extremism and exclusion of progressive thinking. A dictator toppled and hanged a democratically elected prime minister, suspended the constitution and usurped civil liberties and human rights. Soon thereafter, the entire region was engulfed in the fire of extremism and terrorism, which still haunts the region and, to a similar extent, the world today.

In those turbulent times, British values inspired a young lawyer to lead the Movement for Restoration of Democracy (MRD), thereby taking a stand against rising extremism in the hope of restoring democracy, rule of law, tolerance and civil rights. MRD was one of the World’s greatest nonviolent democratic movements since the times of Gandhi.

When MRD was in its infancy, that young lawyer made the unusual decision to have his four-year-old son lead the popular movement on the front line as its flag-bearer, amidst tear gas, curfews, public floggings, hangings, baton charges, arbitrary detentions and arrests.

Although that child was spared the public floggings and hangings, which were commonplace at the time, he, alongside his father and followers, often faced arbitrary arrest and detention. It made him the youngest political prisoner in Asia and, perhaps, the world; a symbol of a peaceful resistance in the face of tyranny and oppression.

MRD had been founded by the former prime minister Mrs Benazir Bhutto. That young lawyer was my father, Mr. MS Wahlah, the son of a British Indian soldier who fought against the Nazis in the second World War. The British values that inspired Mr Wahlah were democracy, individual liberty, the rule of law, and mutual respect and tolerance for those with different faiths and beliefs. The young child, commemorated by the BBC as “the flag-bearer of MRD”, was I; now a barrister and a British lawyer. I inherited a shared love of British values and believe staunchly in their prescience and wisdom.

Unfortunately, I have seen the same British values fall prey to the misguided rhetoric against immigrant minorities in the United Kingdom. These British values are what made our island punch way above its weight in the scientific, social, legal and industrial arena for the last three centuries; unleashing innovation and producing iconic figures who shaped the course of our modern world.

Our common law system and independent judiciary drives the world’s legal system. It is rooted in fairness and equity. Some of the world’s biggest disputes are settled in the UK and investors and entrepreneurs have been flocking to the UK for hundreds of years, thanks to our renowned jurisprudence.

As a lawyer, I have advised many of these people over the years, but I am now frequently asked by the same people why the right of appeal has been taken away from them - worthy investors and contributors to our society. Why do they no longer have a recourse to an independent judiciary that the entire world trusts?

Some of these people have told me that they worry whether it is a good idea to send their children to the UK for education at our world class schools and universities. They ask why human rights have such a negative connotation in the same country that drafted the Magna Carta and has been a model for human rights the world over ever since.

The rule of law is a sacrosanct and founding principle of our constitution since the Magna Carta. It is the hallmark of a free and fair society, that works for everyone. It represents our final defence against the tyranny of the powerful and inspires great minds, talented individuals and entrepreneurs who want to change the world for the better. It makes them want to come to the mother of democracies, because it assures them that they will be treated fairly in an increasingly unfair and violent world.

Equality lies at the heart of this rule of law. From traders to migrants, everyone has to be bound equally by
and entitled to the laws of the land. Everyone subject to the law in the state must also be able to claim the rights it provides them, meaning that justice must be accessible to all.

Providing protection to the most vulnerable minorities is one of the core principles of our democracy. Without this protection, how can the UK continue to be a beacon of light in this rugged world we live in.
The UK needs to protect its legal system, provide right of appeal and proper access to justice. This should be done irrespective of the background and origins of those who seek it. We must conduct ourselves in an exemplary manner in order to gain wider international recognition and influence.

Our parliament has made progress in the foregoing years in all sectors and our government can take credit for numerous reforms made during this timespan. Equality, human rights, rule of law, access to justice and protection of the most vulnerable in society, however, regardless of class, colour and creed, must not be a lost cause.

We must celebrate the fact that our country, in the words of our prime minister, “works for everyone.” The fact that Mrs May used her maiden speech to pledge her commitment to fighting injustice inspired the democrat in me and instilled me with hope. I am confident that our parliament will once again champion human rights and lead the world in the right direction.

As the flag-bearer of democracy and the youngest prisoner of a dictator, I have to wonder if the British values that I hold dear can be used as a vehicle to inspire future generations to stand up to tyranny, strive for democracy, advocate the rule of law and human rights and prove to be just as inspirational as they were to my father and I many decades ago. 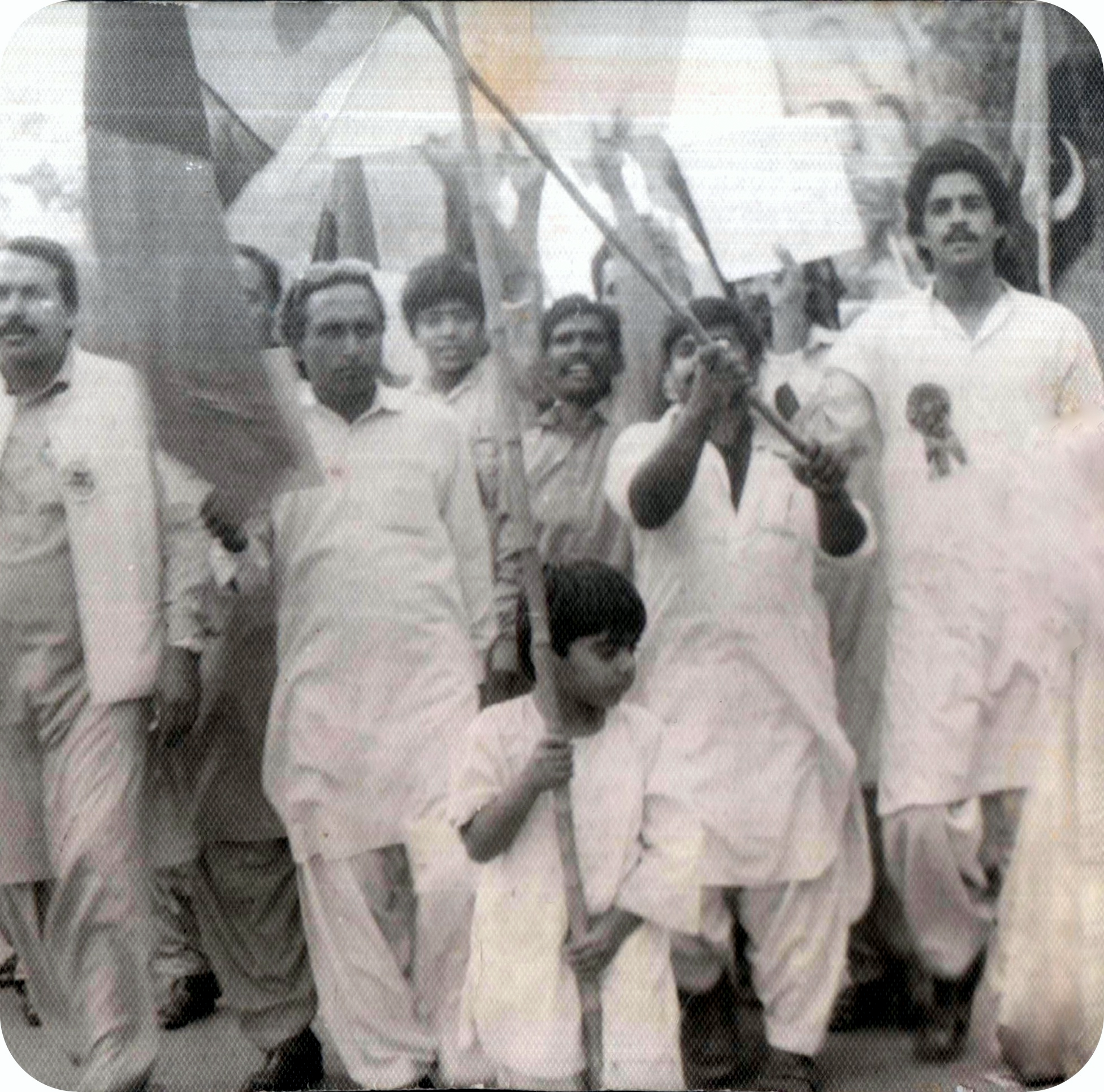 Fraz Wahlah (at the front as the Flag-bearer), with his father in the Movement for Restoration of Democracy in the 1980s