Leicester City Football Club, in two extraordinary years, has given football supporters the world over the opportunity to dream again. The 5,000-1 shots that became champions of England and went on to within touching distance of the greatest club prize in the beautiful game is a sporting story that has reached beyond anything before it.

Founded in 1884 in a garden shed in an industrial city in the East Midlands, initially as Leicester Fosse before emerging in its current guise in 1919, Leicester City has been, for most of its history, an aspirational club – proud of its roots and its community, but lacking in true pedigree. Competing primarily in English football’s second tier, the Club flirted with glory in the early 1960s and won domestic cup competitions during a successful spell around the turn of the 21st century, but has never been considered a powerhouse of the English game. It is the only club to have reached four FA Cup Finals, English football’s showpiece occasion, without winning one.

The growth of elite competitions such as the Premier League (domestic) and the UEFA Champions League (European) and their lucrative broadcast revenue splits have increased the gap between football’s haves and its have-nots.

While the Premier League’s efforts to distribute its centrally-generated wealth have had a degree of success domestically, the league’s uppermost reaches have invariably been reserved for a small number of clubs. Since the Premier League’s inception in 1992 up to the start of the 2015/16 season, 46 clubs had competed in the competition, yet its 23 titles had been shared between just five of them.

Qualification for the UEFA Champions League, Europe’s premier club competition, is currently reserved for the Premier League’s top four clubs and has been similarly exclusive in selection. Qualification has been shared between just nine English clubs since the Champions League began in 1992 (four of them qualifying no more than twice) prior to Leicester in 2016.

Under the ownership of Thai duty free company King Power since 2010, Leicester City have undertaken a period of sustainable, holistic growth; building stable foundations through responsible investment in facilities, personnel and infrastructure. Promoting an abiding culture of excellence with principles of respect, aspiration and loyalty, the Club, then in English football’s second tier, set about reaching and establishing itself in the Premier League.

Establishing the foundations proved costly for King Power’s owners, Vichai and Aiyawatt Srivaddhanaprabha, who invested over £100 million in the first three years of King Power’s ownership to prepare the Club for its Premier League push. Any doubts over the Srivaddhanaprabha family’s long-term commitment were crushed emphatically in 2013, when that initial investment was transferred into equity – relieving the company of all debt for the first time in 20 years.

Such gestures of solidarity formed part of an ambitious engagement programme among supporters and the Leicester community – putting the people and their pride for their club at the centre of both our decision-making and our achievements. Whether it was free beer for supporters, the issuing of ‘clap banners’ to aid matchday atmosphere or multi-million pound donations to some of the city’s most worthy causes, Leicester City started to do things differently.

The outcome was the forging of a unique and intangible spirit between a club, its players, its supporters and its city; a unity that has been our strength in the face of the fiercest of challenges and the most sceptical of doubters. A belief in our methods that, in 2015, faced with near-certain relegation in our first top-flight season in a decade, inspired the greatest recovery in Premier League history. Seven wins from our final nine games, remarkably, secured survival.

What happened the following season is now well documented – an unprecedented charge from relative obscurity to the most unlikely championship win in history. A team of unfancied, unfashionable players led by a coach without a league title from four decades in the game. Yet Claudio Ranieri, the affable yet fiercely competitive Roman, managed to draw performances from mercurial talents such as Jamie Vardy, Riyad Mahrez, Wes Morgan and Kasper Schmeichel that defied pre-season odds of 5,000-1. Our belief in our methods, indomitable spirit and determination to seize our moment resisted the growing weight of history.

As the world’s disbelieving gaze turned to Leicester, the Foxes sprinted clear of the chasing pack and were crowned Premier League champions by a staggering 10 points.

Predictably enough, the Club’s qualification for the prestigious UEFA Champions League was met with widespread derision. Dismissed by many, once again, as without hope of progressing, the competition’s challenges – including improvements to stadium facilities, increased broadcast requirements and a bigger fixture schedule – were tackled head on.

Our off-pitch exertions were once again rewarded with sporting success – as we became the only English team to reach the 2016/17 UEFA Champions League Quarter-Finals, breaking several competition records in the process.

After two seasons unlike any other in the Club’s 133-year history, Leicester City are faced with the challenge of translating the unexpected lessons of recent adventures into an already-established long-term vision. Despite recent exploits, the quest to establish itself in the Premier League on a long-term basis is an on-going process, making the continued reinvestment of growing profits a perpetual necessity.

Among the priorities going forward, will be the retention of the intimate spirit that has defined our magical journey, as the Club’s profile, and that of its talent, continues to grow. Through keeping the people of Leicester at the heart of our decisions and our achievements, our status as a proud international representative of our community will only become stronger. 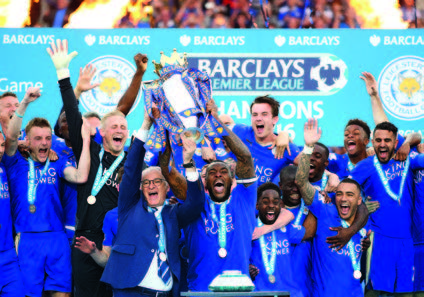